This account most likely has its roots in the fact that I can no longer tolerate the unbearable boredom of a research paper which borders on the nonsensical and bears little relationship to truth in Anthropological thought. However, one supposes that one’s life is unique in some respects. Also, I have been asked by my children to make an accounting of my (what seems to them) terribly humorous and zany life.

Retrospect is quite interesting to the retrospectee. It is probably acceptable to feel that looking back over a fifty year span (As I write it is July, 1982) gives one authority to recount a lifetime of assorted details.

I would imagine that February 10, 1929 in Chicago was a rotten day in the weather department. Nevertheless that was the day when I was born. It probably has something to do with the way I feel about the sun. I crave sun. I miss it when dreary winter comes and have spent probably a million hours dreaming about sun and today pools and warm sand. Well, I was born in February and so were Abe Lincoln, George W. and Marian Anderson. I was the third of four daughters. My parents longed for a boy (ho hum so did every other parent in those unenlightened days). So I was named after my father. At least my middle name was named after him. My first name was a travesty, but that story comes later.

My mother and father and two older sisters lived in an apartment in the southwest side of Chicago. Last year (1981 to those of you who were not paying attention to the date mentioned earlier) when I applied for my passport I discovered that my father had given the wrong address on my birth certificate, so an addendum of sorts had to be attached to make a legal-real-person of me. My coming must have been a severe shock to him as was my exciting arrival at St. Bernard’s Hospital. I was born dead. Thrust casually onto a nearby gurney by our apologetic family doctor, I was hastily baptized and soon forgotten. This, however, did not stop me. I returned to life with a blood-curdling cry thereby terrorizing the delivery room staff and re-welcomed to the land of the living. This incident probably explains why I suffer somewhat from claustrophobia/agoraphobia- but that comes later, too.

I was partner to a crime at the age of six months. My father, an editor for a publishing house (Shaw and Co., which merged with McGraw Hill) was transferred to New York City. My mother and father, when presented with a large container of bathtub gin upon their departure and just as they were to board the train, hastily and sneakily concealed this illicit contraband beneath my bassinet mattress. This was prohibition after all! I was admonished not to cry or make any suspicious sounds which might alert the booze inspector and acted accordingly. I wonder if this incident might explain, in some bizarre fashion, my fondness for gin martinis!

Since two years in Roselle, New Jersey are a terrible blur and merely hearsay I cannot rely on my failing memory to fill out details. But over the years there has been a recurrent story told about my oldest sister, Marguerite Alice (for brevity’s sake, Margot) biting a neighbor boy named Johnny Green in the chest. She would have been about four or five years old. That was the only account I ave heard concerning this biting thing and Margot. About Johnny Green’s survival, I know nothing.
I have photos (Kodak box type) of my sisters and I sitting in a sandbox. Margot a china-doll type with dark hair, EVENLY CUT bangs (MINE were always crooked) wearing a sweet dress and smiling sweetly into the camera; Irene, the at-the-time middle child with rakishly beautiful red hair framing a serious and determined face and wearing an off the shoulder t-shirt which appears to be rather untidy.

We didn’t live in New Jersey long enough to pick up any accents. Daddy’s publishing company fired all of the employees who had been transferred from Chicago, and so, after a brief career with Who’s Who In America, Daddy found another position with yet another publishing company in Chicago. So back we came, without any bathtub gin; totally lawfully.

We actually lived, I learned later, in Berwyn, Illinois. I remember only one incident from that time. When I was almost two years old my mother came into my bedroom where I was napping (or supposed to be) and chased the cat from my crib. I was really annoyed because I loved the cat but Mother was certain that kitty would steal my breath from me and suffocate me – a popular notion at the time. But I do remember the sunlight coming in through the venetian blinds and making rippling waves on my blanket and the cat.

We had a lovely big white fluffy dog while we lived here. He was an English Sheepdog and we loved him – his name was Rags. This was the first of a long line of dogs – but we had a neighbor who disliked Rags and complained about our having him. Later we discovered Rags dead of poison of some sort. Probably given to him by the man next door.

In 1933, when I was four years old, my parents took us to the Century of Progress, a world’s fair. I remember posing with a large, furry, black bear for a picture. Also, my parents whispered a great deal about a fan dancer named Sally Rand (which was a shocking thing I gathered). It was a very hot day and my mother was very pregnant. I did not know this at the time but about a week later my younger sister was born. Daddy explained emotionally to us that we had a baby sister and her name was Elise Marie! One day we went to visit Mother at the hospital (new mothers stayed in bed for two weeks in those halcyon days), we could not go in to see her, but Daddy could and he told us how beautiful the baby was. Well, I could read the handwriting on the wall. The shared-time epoch had begun. As we left the hospital Daddy pointed to Mother who was leaning out of her room and waving to us. I started to cry because I had a stone in my shoe but everyone thought it was because I was happy to have a baby sister.

We had a sitter while Mother was in the hospital. For two weeks. This sitter was a fiend. She took us to see The Wax Museum, a movie which was all the rage. We three sat backwards in our seats alternately whimpering and screaming in fright. Particularly at the part where the eyes move in the wax people. This fear was reinforced when I was seven years old and heard an Orphan Annie radio show about portraits with moving eyes. I still avoid eyes in portraits and concentrate almost entirely on noses and mouths. 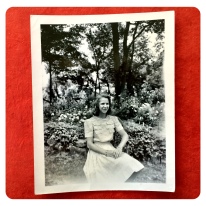